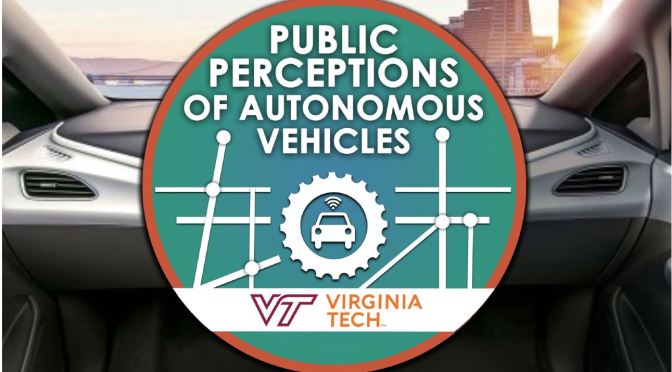 One part of the AV studio project was a survey of residents in Arlington’s Ballston neighborhood to better inform the County on the attitudes and possible usage of autonomous vehicles.

Autonomous vehicles (AVs), sometimes referred to as self-driving or driverless vehicles, are computer and network-controlled vehicles that do not require a human driver for operation. Varying degrees of vehicle automation technology exist today, such as adaptive cruise control, parking assist, and anti-lock brakes. Recently, transportation and technology companies have been testing fully autonomous cars and shuttles, which are programmed to handle all steering, throttle, and braking (ST&B) decisions based on traffic and road conditions. It is anticipated that AVs could bring many benefits to communities and improve mobility options. Prior perception surveys about AVs have
mainly been conducted at the national and international level. Most studies have found that as AV technology continues to develop over time, public attitude has become more positive. Typically, past respondents have indicated a belief that AVs will bring increased safety, more convenience, and reduced stress as potential benefits. Safety, liability, hacking, data sharing, and equipment failure were the most common potential risks previously reported.

Our research team conducted an online survey in Ballston, a high-density neighborhood in Arlington County, Virginia. A total of 253 responses were collected over a three-week period between February and March 2019. In our study, most participants held a generally positive view about AVs (54 percent) and were likely to use them once commercially available (65 percent). The highest reported potential benefits were not having to find or pay for parking; making better use of travel time; reduced stress from driving; more efficient travel; and fewer deaths and injuries from driving. The highest-reported potential risks were unreliable technology; hacking; personal data privacy; AV companies learning about personal travel behavior; and safety. These results partially confirm previous perception studies about more convenience and reduced stress as possible benefits, as well as hacking and personal data being compromised as possible risks about AVs. Our findings also refute that safety was the most-reported possible benefit, as unlike prior studies found, it was the 5th-highest reported benefit. Women were also found to be more apprehensive about AV adoption than men were. Based on our findings, AV developers should focus on improving reliability and data privacy, in efforts to address concerns about AV technology. Future research should focus on examining the differences between men’s and women’s perceptions about AVs and why concerns about AV technology exist. Limitations of our study include a limited sampling frame; lack of diversity in the study population in terms of race, household income, and education; and limited statistical analysis due to time constraints in the academic year.